How Do Essential Oils Work

How Do Essential Oils Work?
by D. Gary Young

Aromatherapy and how essential oils work. That is the question. Aromatherapy is a phrase coined by Rene-Maurice Gattefosse, PhD, in 1920. He was a French cosmetic chemist. While working in his laboratory, he had an accident that resulted in a third degree thermal burn of his hand and forearm. He plunged his arm into a vat of lavender oil, thinking that it was water. To his surprise, the burning slowly decreased and then stopped within a few moments.

Over a period of time, with the continual application of lavender oil, the burn healed completely without a trace of a scar. As a chemist, he analyzed the essential oil of lavender and discovered that it contained many substances referred to as chemical constituents or chemical properties. 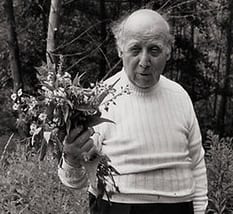 As a result of this, Dr. Gattefosse determined that essential oils contained tremendous healing properties. He came up with the word “aromatherapy”. Dr. Gattefosse shared his experience with his colleague and friend, Dr. Jean Valnet, a medical doctor in Paris, France. During World War II, while serving as a medical physician in the French Army at the China Wall, he treated war victims.Dr. Valnet ran out of antibiotics, so he decided to try using essential oils. To his amazement, they had a powerful effect in reducing and even stopping the infection. Hence, he was able to save many of the soldiers who otherwise might have died even with antibiotics.

Dr. Valnet had two students who did their internship with him who were responsible for expanding his work, Dr. Paul Belaiche and Dr. Jean-Claude LaPraz. They discovered that essential oils contain powerful properties. As well as being powerful oxygenators, also the ability to act as carrying agents in the delivery of nutrients into the cells. For example, if you take a geranium plant and tear the leaf or the stem, a clear liquid will appear. This liquid is a very subtle and volatile essence that exudes from the damaged tissues of the leaf. So it is with the human body. With a cut or scrape, we see the flow of blood from that opening in the skin.

One significant difference between the blood and the plant liquid is the color. In the resin or oil being released from the plant, we find trace elements of nutrients, hormones, enzymes, vitamins, minerals, and immune-stimulating properties. Another key agent found present in that resin is OXYGEN. Oxygen molecules are part of the chemical elements of the resin, such as alcohols, phenols, esters, sesquiterpenes, terpinols, etc., which together create an essential oil. 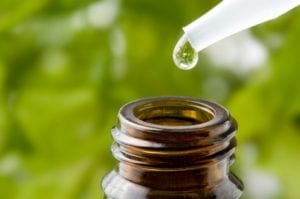 The plant releases the oil in order to clean the break, kill bacteria and start the regeneration process. When blood is released because of broken skin, it is for the same purpose: to clean the wound, kill the bacteria, prevent infection, and begin the healing and regeneration process. A simple comparison of the plant and the human body shows us a precise similarity, as both the oil and the blood are the transporters of the fundamental nutrients necessary to feed and nurture the cells.

Furthermore, the essential oil has the ability in its chemical structure to penetrate the cell wall and transport oxygen and nutrients inside the cell, thus increasing cellular oxygen and giving more support to the immune system. Research has shown that with their immune-stimulating properties, essential oils enhance and support the building of the immune system, whether they are inhaled or rubbed on the body topically.

Those who contract a cold or the flu generally recover 70 percent faster using essential oils!

It has been said that when essential oils are diffused in the home, they have the ability to increase the atmospheric oxygenating molecules into the air. Oils increase ozone and negative ions in the home, which inhibit bacteria growth. This prevents and destroys existing odors from mold, cigarettes, animals, etc. Essential oils have the electrical magnetic attraction to fracture the molecular chain of chemicals and take them out of the air, rendering them non-toxic to the body. Scientists in European countries have found that essential oils will bond to metallic and chemicals and carry them out of the body, working as natural chelators, inhibiting these toxic substances from staying in the tissues. Essential oils remove dust particles out of the air and, when diffused in the home, can be the greatest air filtration system. These are all wonderful attributes of essential oils. Essential oils can be extracted from plants, trees, seeds, flowers, petals, stems, roots, bark, or even the whole plant. Today, about 200 different types of oils are being distilled with several thousand chemical constituents and aromatic molecules that have been identified and registered. 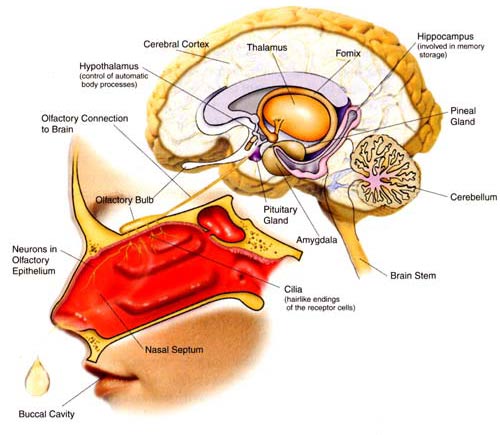 The integral part of the nose responsible for odor detection is the olfactory, consisting of two membranes, one on each side of the mucous membrane covering the bony extension of the nose. The olfactory membranes are very tiny and are well protected by the casing of the nose. They contain about 800 million nerve endings for processing and detecting odors. These nerve endings are triggered from a signal from the genes along the inside passage of the nose.

The olfactory hair-like nerves receive the micro-fine, vaporized oil particles, carrying them along the axon of the nerve fibers, connecting them with the synapse of the secondary neurons in the olfactory bulb. The impulses carried to the limbic system and the olfactory sensory center at the base of the brain, pass between the pituitary and pineal gland and then to the amygdala, which is the memory center for fear and trauma. The impulses then travel to the gustatory center where the sensation of taste is perceived.

The olfactory nerves are very much like other nerves and organs in the body. They also respond to electrical signals and impulses that form coded messages that are dispatched to various areas of the body. This may be why some oil inhalation will increase endorphin, neurotransmitter and antibody production. Only in 1989 was it discovered that the amygdala plays a major role in storing and releasing emotional trauma, and only odor or fragrance stimulation has a profound affect in triggering a response with this gland.

Dr. Joseph Ledoux, of the New York Medical University, feels that this could be major break-through in releasing emotional trauma. People who have turbinate problems, such as a deviated septum, polyps, or who have had nose surgery, may have a very difficult or impossible time detecting the complete odor. The same holds true for people who have worn a lot of make-up, perfume and cologne or used hair sprays, hair coloring, perms and other products with synthetic odors. Many olfactory hairs respond to only one kind of odor molecule, and simultaneously others will respond to several different kinds of odors. This tells us that not all of the receptors are stimulated at the same time in the presence of odorous vapors.

Fragrance is one of man’s greatest enjoyments, bringing back memories of past experience
and creating a feeling of security, grounding and well-being.
– Copyright 1996-2000 Dr. Gary Young

About the Author: Debbie Allen

Debbie is a Functional Nutritionist practicing in Denver CO. Debbie offers nutrition consultations that include nutrition analysis of your current food and lifestyle choices, enhanced with supplement and essential oils with a Zyto Compass Scan. She has been a Young Living Member ID# 73621 since 1997. She is also the founder of Denver Nutrition, LLC. She can’t imagine a day without oils. Follow here to learn more about the essential oils and how to live a life of wellness, purpose, and abundance!

This site uses Akismet to reduce spam. Learn how your comment data is processed.

Saving Money with Essential Oils? Imagine How Much Money You Could Be Saving In

Can I Take Essential Oils Internally?